Find Your Kind Here at Body Organics, here is some more text just to make sure this happens

Carla Mullins is co-director and co-owner of Body Organics®, a business based in Brisbane, Australia. Body Organics® started off as a small Pilates studio in West End in Brisbane but has over the last almost 20 years grown into one of the leading Pilates studios in Brisbane with two studio spaces and now also includes Body Organics Education® and more recently the Makarlu®. As head of Body Organics Education® Carla oversees all the training courses as well as developing new training material. She educates new Pilates teachers as a course provider for the APMA and has delivered the APMA Diploma in Pilates Movement Therapy for over five years.

Carla started her career as a solicitor and practiced for nearly 13 years and came to Pilates in 1993 because of complex neurological and health problems. Application and consistency of the method meant that Carla regained her health and was able to move with some grace and more importantly without pain. In 2002 she decided to set up her own studio in Brisbane.

The curiosity and tenacity that allowed her to practice law and regain her health is what also makes her continue to study, train and explore anatomy and movement in as many mind-body disciplines as possible. She is passionate about understanding how pain or restrictions are affecting a person’s ability to move. It is through the education of her clients and teaching them to understand how their body works and how it could work better that she gets the greatest satisfaction. It is important for Carla that the transformation she can see in her clients in the studio is transferable to their everyday lives whether they are an athlete, mother, office worker or tradesperson.

Carla is a Level 4 Professional Practitioner with the Australian Pilates Method Association (APMA) and the Pilates Alliance Australasia (PAA). She has studied Pilates with PITC, Polestar as well as the APMA. She has a Diploma in Pilates Professional Practice (PITC), Gyrotonic Level 1 licence, CoreAlign Level 1, 2 and 3 certification and Certificate IV in Training and Assessment. She is also a trained instructor with the Neuro Studio and has completed their Pilates for Neurological Conditions course on multiple occasions. Carla is also a Level 1 Gyrotonic teacher. She also has a LLB (QUT), M. Soc Sc & Policy (UNSW).

Carla regularly writes articles on Pilates, rehabilitation and movement for the APMA and PAA. She runs courses and workshops for movement professionals in Australia, New Zealand, USA, Canada and Spain that are recognised by the PMA, APMA and PAA.

Besides being a Level 1 gyrotonic teacher Carla has also completed further gyrotonic training:

// Gyrotonic from an osteopathic perspective

// Gyrotonic application to the shoulder girdle

In 2014, Carla travelled to Bali for a Gyrotonic rejuvenation retreat lead by Juliu Horvarth, creator of the Gyrotonic Expansion System.

Dr Janet Schloss, PhD, PG cert Clin Nut, AdDip HS, Dip Nut, Dip HM, BARM, is a clinical nutritionist and naturopath working in Brisbane who has over 20 years of experience in her field. Janet splits her time between seeing patients in her private practice and conducting research. She completed her PhD at the School of Medicine at the University of Queensland in 2015 and continues to conduct research to help patients and practitioners establish evidence based practices.

Janet is also the clinical trials manager in the office of research at the Endeavour College of Natural Health. In addition, she is a fellow with the International Naturopathic Leadership group through the University of Technology Sydney, Australian Research in Complementary and Integrative Medicine (ARCCIM).

Janet’s main specialty and interest is working with patients who have cancer, autoimmune conditions or chronic diseases, especially those going through traditional treatment. As such she works with a number of oncologists and surgeons as the nutritionist for their cancer patients. Janet has long been involved in research about cancer and nutrition, particularly for individuals going through chemotherapy and radiation. Janet has also worked extensively with clients after their cancer treatment to help with means of reducing the likelihood of metastasis and tumour growth.

As a naturopath, Janet also assisted Henry Osieki in the writing of the book “Cancer a biochemical and nutritional approach”- Edition 1 & 2 (2002 and 2003). She has also written the cancer chapter of “Clinical Naturopathy” by Sarris and Wardle, in addition to numerous other publications. Janet also works with such organisations as the Kim Walters Choice program and the Queensland Cancer Council to give nutritional seminars and advice.

In addition to her naturopathy and nutrition work with cancer patients, autoimmune conditions and  chronic illnesses, Janet has extensive experience in working with people dealing with stress and anxiety related problems such as insomnia, tiredness and digestive disorders.

Chrystene was first introduced to the Pilates method as a client in the early 90’s. At that time she had no background as a movement professional, but instead had a background working in restaurant, hotel and venue management and music photography and arts. It did not take Chrystene long to recognise the benefits of this form of exercise and very quickly she developed a passion for Pilates as a client. Pilates helped her recover from long term illness and rebuild both her physical and mental strength.

Chrystene started exploring different modules of healing, self help education and meditation and taking on short courses in nutrition, anatomy and physiology, meditation, psychology and therapeutic massage. She became a certified Pilates teacher through the Diploma of Professional Pilates PITC and in 1999 she opened up her own boutique Pilates studio in Bondi, Sydney called Bodhimaya Pilates Center. She specialises in tailor made programs for each client addressing their specific needs.Chrystene is passionate about teaching Pilates and movement and strives to continue the exploration of movement and the health and well being of anyone she is fortunate enough to work with.

To Chrystene it is a necessity to maintain her own physical practice in the method as this supports her compromised immune function and energy. Pilates combined with a healthy lifestyle has always supported her in achieving this. At 66 plus years of age this continues to be her backstop for health and she continues to thrive in her work and constantly looks to educate herself further.

Continued education over the past 25 plus years includes many short and long courses in; Injury Rehabilitation; Pre and Post Pregnancy; Pilates and MS and living with Neurological conditions, Cancer and Autoimmune Conditions; The Ageing Population; Understanding Neuroanatomy amongst endless short courses and workshops in functional movement and different understandings of application of repertoire for both strength training and rehabilitation.

Leisa has been a Pilates teacher since 2012. Over this time Leisa developed a keen interest around the deeper workings of our body its response to stress and trauma. Leisa’s continuing studying in Somatic Experiencing and Somatic Practice has allowed her to expand her understanding of how our body can hold stress and the impact it can have on how we experience all aspects of our life.

Both areas of study work with tracking the nervous system and our stress responses. Merging her knowledge of anatomy, movement and the nervous system Leisa explores the depth of our experience and how our body responds to stress.  Through awareness comes change.

After an extensive and rewarding career in the Victorian Public Service, in 2013 Kerrie decided to follow my passion for helping people achieve health benefits and lifestyle changes through quality exercise instruction in a supportive and caring environment.

Kerrie is an Accredited Exercise Scientist (ESSA) and Pilates Instructor (Level 3P, APMA). Kerrie is completing her Masters in Exercise Physiology (one more subject to go). Kerrie uses proven methodologies drawing on both my Pilates and exercise science experience to support clients achieve their health and fitness goals.

Kerrie is an experienced educator and trains teachers in Australia in how to use the FUSE LADDER.

Kerrie has an interest and passion for working with people with neurological conditions.

How We Deliver Our Training 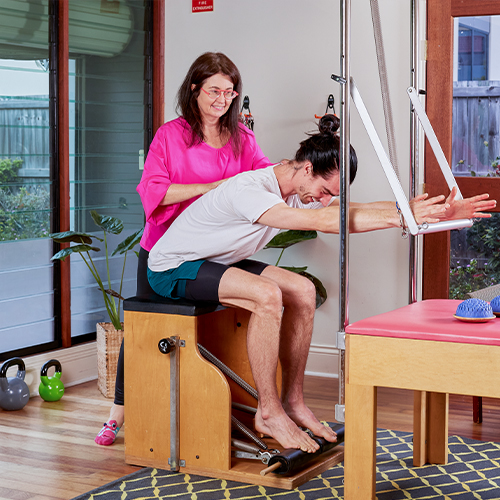 Each online workshop comes with a digital version in PDF format of the training manual. This gives you extra tips and exercise support.  Optionally, you can purchase a printed colour copy of the manual by visiting our shop. 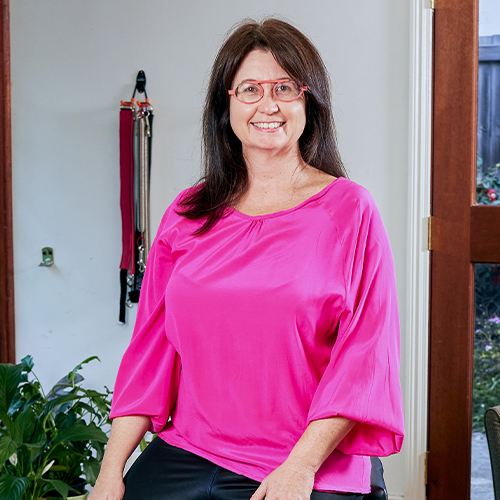 Body Organics Education® has put together several online training courses that you can access at any time.  The workshops range from Foundational, Repertoire and Specialist Courses.  View our online training here. 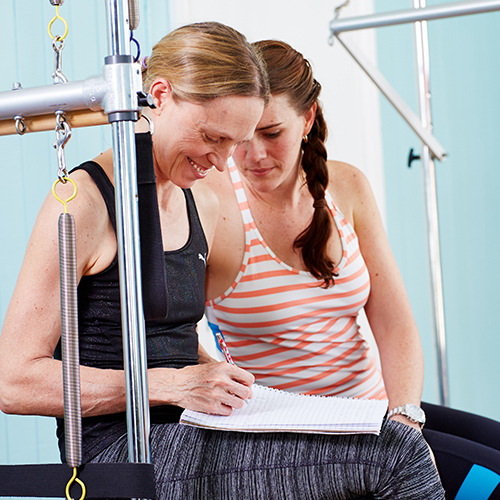 In addition to the online lessons and resource manuals you have the option of joining us for online live group tutorials (see each course for details). You can also book in for private online sessions to delve deeper into your knowledge, by contacting us here.

Do I get continuing education points for my course?

Each course in its description explains how many points are offered by each association. Each association has different rules and sometimes the point count is different.

Your points are allocated on successful completion of the course.

Do I get a certificate?

A certificate is generated by the Body Organics Education Learning Management System when you have successfully completed the course.

What happens when I have purchased a course?

Once payment has been processed for your particular course you will automatically be logged into the course. You will also receive an email with the additional information for your course. In this email there will be details about what you need to do to successfully complete the course, any time frames and pass marks for your specific course.

What happens if I have trouble accessing the course?

You need to contact us at education@bodyorganics.com.au and we will help you through the process. It is important to recognise that it may take us up to 24 hours (Monday to Friday) to respond to your query. If you are in a different time zone to Brisbane, please bear this in mind.

Once we have made contact we will check if there are any technical problems and help you access your purchased course.

What are the technical requirements of my computer for me to access the learning courses?

You can watch the content using a browser on your desktop computer or your smart device (phone or tablet).

What Our Students Have to Say

Body Organics courses are perfect for the seasoned instructor who wants to learn a deeper knowledge of anatomy. Body Organics teachers have an incredible way of explaining complicated biomechanics in easy to apply methods. I’ve always found learning anatomy from a textbook hard to follow, but Carla applies imagery to bring the concepts to life. When you understand how the body moves, you’ll be able to have the capability to cater to a range of complex clients and this is what you get with Body Organics. 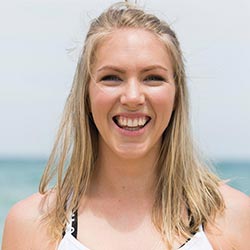 Kimi Broadbent
Melbourne, Victoria
I have been teaching Pilates for over 25 years and never stop learning from Carla! Body Organics Education is my go to for continuing education and deepening my knowledge. Carla is one amazing and generous lady, with a gift of explaining anatomy and how the body works in a way that I totally understand. Attention to detail and making sure you understand what is being delivered is Carla’s priority. I highly recommend Body Organics Education, you won’t be disappointed. 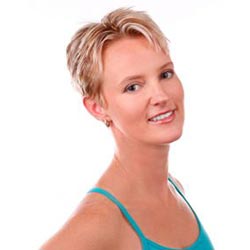 Renae Blackmore
Gosford, New South Wales
Carla is a highly experienced and very knowledgeable instructor with a unique take on the Pilates method. Always generous with her expertise, she really opened my eyes to the beauty and power of movement via Pilates. I have continued my continuing education with Body Organics, one of the best things I ever did, and cannot recommend them highly enough! 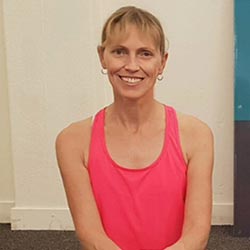 Kathy Sharp
Brisbane, Queensland
The teachers cater to the current stance of the course participants as individuals, and teach as highly informative guides, in a manner that helps the participant to discover their own ideas and to further guide themselves. Do a Body Organics Course and be re-born as a teacher. Also, Carla is super funny - partake in a course simply for the comedic value! 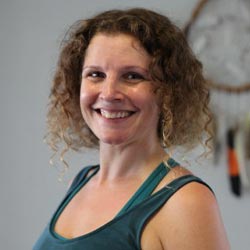